There might be a point in your life when instead of typing an e-mail you would prefer to use older and more sophisticated form of correspondence, like a traditional handwritten letter. And what would be a better decoration of such a letter than a wax seal?

Using a wax seal stamp is very simple and intuitive, and you only need some basic items to create beautiful, personalised letters with a unique wax seal. However, to avoid common mistakes and to make sure final result will be satysfying, I invite you to read this short guide on how to use wax seals. In this tutorial I will be using a Game of Thrones Hand of the King wax seal kit, but the same rules will apply to any wax seal you will have access to.

First of all, you’ll need to gather all items and materials required to use your wax seal, that is:

You can use a generic wax seal stamp (like Hand of the King kit mentioned earlier), create one by yourself or pay a craftsman to engrave customised stamp with your own design. No matter which option you chose, it is important to make sure the matrix of the stamp is metal or ceramic. No wooden or made of polymer clay stamps will be durable enough to serve you for a long time. The weight of the stamp is also important, because it has to press the wax below the matrix with sufficient force. Too heavy stamps (e.g. some antique ones with lead filling) will squeeze the wax out and the layer remained below the matrix will be too thin to form a distinctive mark. Too light ones, on the other hand, won’t press the wax strong enough to form a mark, but this problem can be easily solved by pressing them down manually with a certain amount of force. The bigger the stamp the more wax you will use to make a single seal. Some popular generic wax seals sold by Manuscript have a diameter of 18 millimetres, which is rather small, but it allows you to make a lot of seals from the single stick of sealing wax. Most of customised stamps have a diameter between 30 and 35 millimetres and the Game of Thrones wax seal stamp I’ll use has a diameter of 24 millimetres which is golden mean. 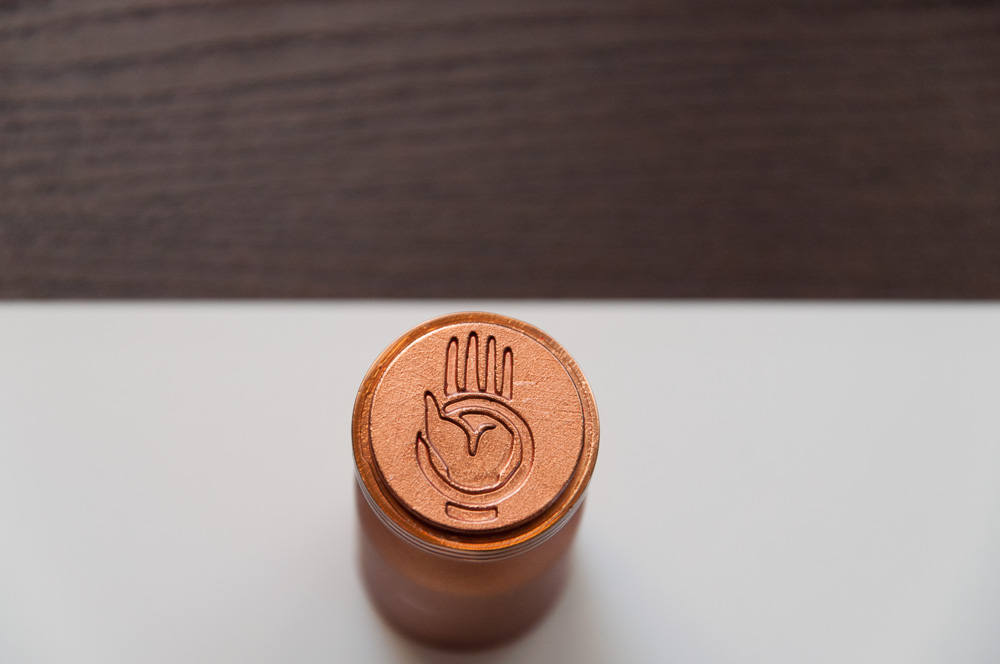 I use Game of Thrones Hand of the King wax seal. Its quality is very good and it’s much cheaper than customised wax seal stamps produced by craftsmen.

A stick of sealing wax

Sometimes it comes along with a wax stamp you buy, but the best quality sealing wax is sold separately. You can use either ordinary sticks or the ones with a candlewick. One stick weighting 100 grams will be sufficient enough to make few dozens of medium (diameter of 25–30 millimetres) wax seals. Sealing wax comes in a variety of colours, but the most elegant are the classic ones: red, brown and dark wine (green are good, too). Important notice: the lighter the colour, the harder it is to produce a final seal without any dark flaws (why that happens - see below). The sealing wax in it’s normal shape is pretty fragile and crumbles easily, so make sure to use it carefully. Because you need to hold the stick while its other end melts in a flame, small bits and crumbled pieces will be practically useless, unless you have a special melting pod. Safety notice: sealing wax melts easily in a fairy low temperature, so even if a drop accidentally falls on a bare skin it has a temperature similar to ordinary candle or paraffin wax. Nevertheless if your skin is delicate or irritated it can cause a small burn, so be careful while melting sealing wax in a flame and applying it on a paper. 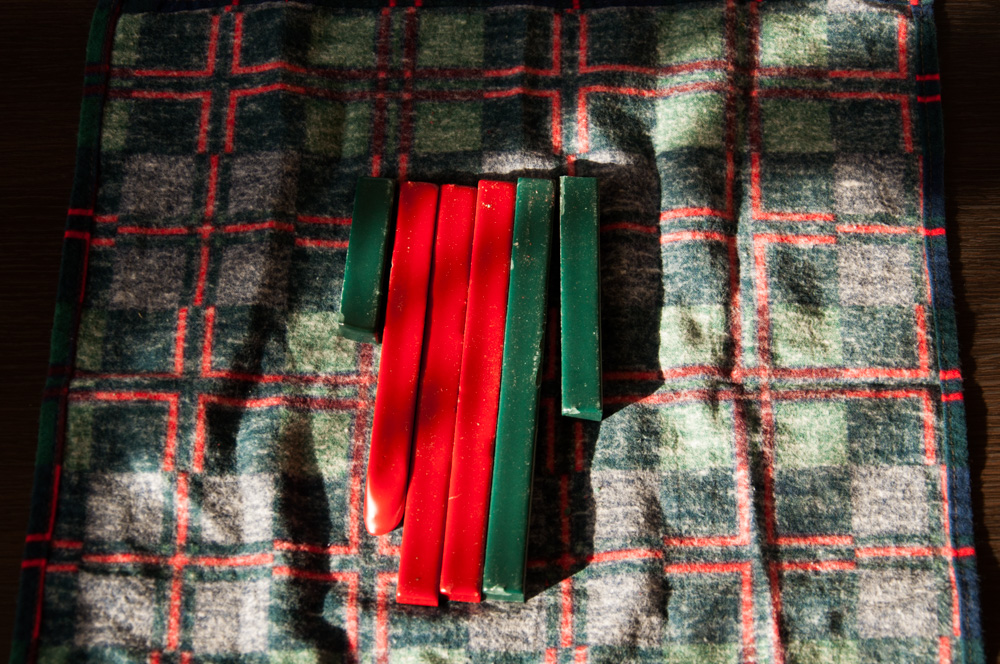 Sealing wax comes in handy sticks and a variety of colours. Be careful, these sticks are pretty fragile and crumble easily.

Although sealing wax melts in a quite low temperature, it heats up somewhat slowly, so you need a source of constant, stable flame to heat it up enough for melting to occur. An ordinary match would burn out far too quickly before heating up the wax, so the gas lighter is the cheapest and best solution available. Maybe it’s not in the old-school style, but from the practical point of view it is the easiest option ‘What about a candle?’ some of you might ask. Well, you could heat up the wax with a candle, but the problem is, candle wax melts too, and it could drop on your paper spoiling the seal. Either candle wax or paraffin wax don’t mix with sealing wax easily, so it would be clearly visible in the wax seal as a pollution. You can also use a sealing wax with a candlewick, it’s more expensive, but for some people easier in use (you don’t need two hands to melt the sealing wax and apply it on paper). I prefer traditional wax without a candlewick, but if you have or want to use the earlier, please notice that the candlewick in sealing wax is way harder to light than the one seen in ordinary candle, so you still need a gas lighter to ignite it: matches would burn out too fast. 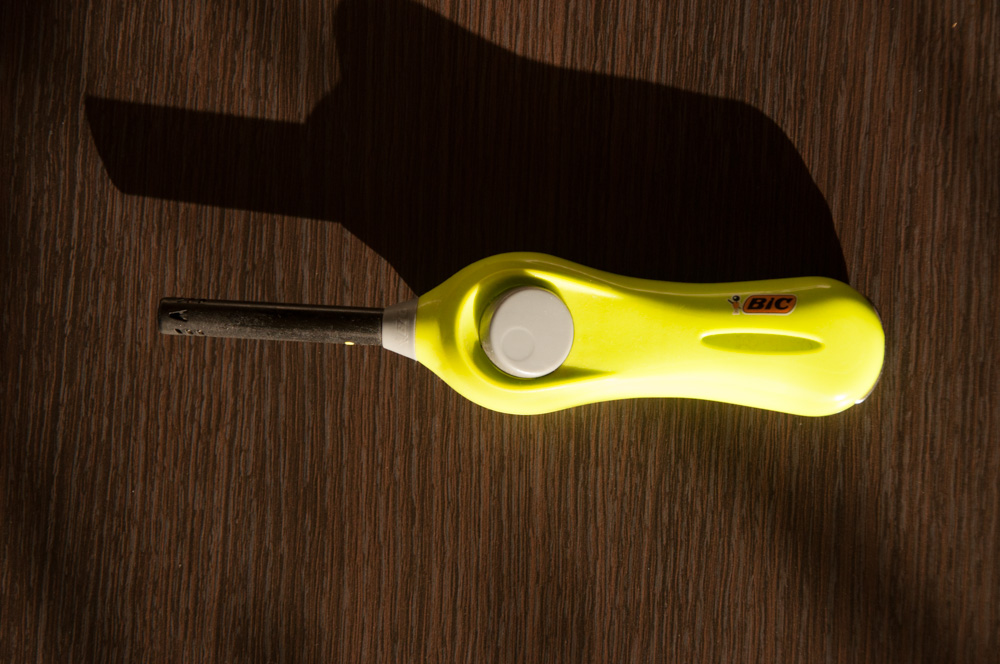 Gas utility lighter is essential as neither matches nor candles can light the candlewick in sealing wax stick or melt down the sealing wax itself.

A bit of cooking oil and a cotton swab

Well, that might sound strange, but these two items are crucial for creating a nice looking wax seal. Once melted, sealing wax solidify in the matter of seconds. When it’s still warm and congealed, it’s extremely sticky and if you rise the seal stamp too early semi-fluid wax will plug all the little grooves in the matrix of your seal. Similarly, if you rise the stamp too late, the wax will solidify on the stamp and not on the paper, so again, the stamp will be plugged. To avoid both situations you just need to wet a cotton swab in cooking oil and wipe the surface of stamp’s matrix before pressing it down to the melted wax. This will prevent the wax from sticking to the matrix and even if you don’t rise the stamp in the right moment (which is difficult, especially when you lack of experience), nothing bad will happen. Finding the right moment for rising the stamp is tricky, because it varies from 5–7 seconds to even 30–35 seconds, depending on the type of sealing wax you use, its temperature and amount put on a paper, material the matrix of your stamp is made of, even on the type of paper you use! So my sincere advice to you is to wipe a matrix with a bit of cooking oil first, it will prevent your stamp from plugging and give the nice polish to the wax seal placed on paper.

Something heavy to use as a paper weight

You can put a wax seal on either envelope or letter itself, and if you chose the second option you need to fold the letter in a right way so the wax won’t damage filled area. Depending on type of folding, the place where you’ll put the seal might not be entirely flat (e.g. two opposite edges of a folded sheet), and in that case you’ll need to flat it out to prevent fluid wax from either flowing under the folded piece or flowing down to the lowest area of the paper.

Letter or envelope you want to place wax seal on

In medieval times there were no envelopes, so wax sealed were applied directly to the folder letter sheet itself, with writing on its internal side. Nowadays you can chose to either seal the letter itself or the envelope that contains it. In any case you’ll get the best result when using textured stationery (the wax clings easier to rough surfaces and most of ordinary envelopes or papers have flat, smooth surface).

We wouldn’t like to destroy that beautiful tablecloth of yours, now would we? 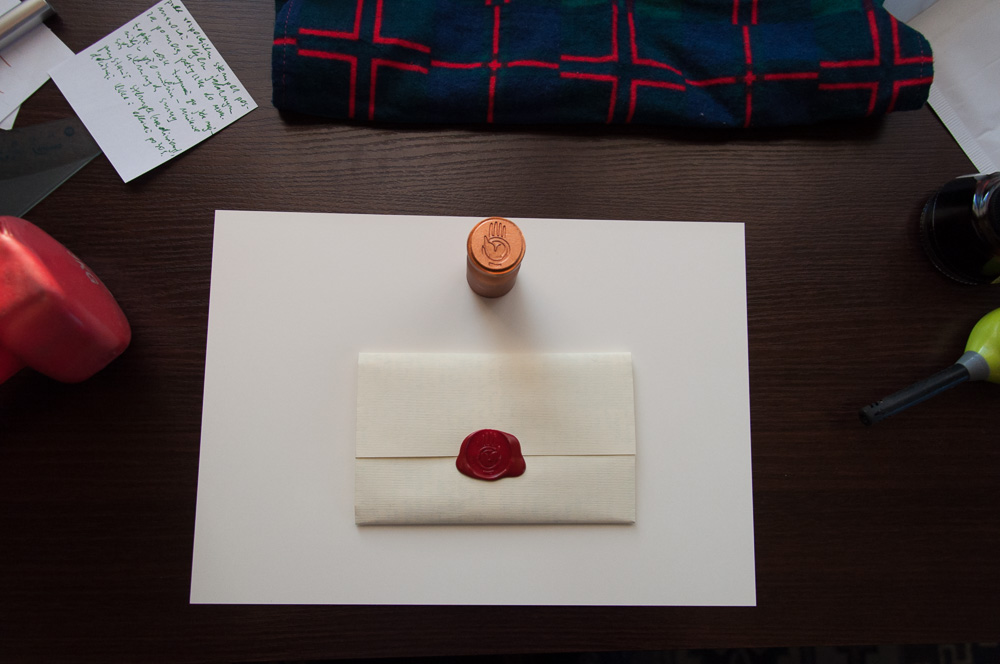 My workspace. A single sheet of A4/Legacy paper will be sufficient enough to protect it against melted wax. 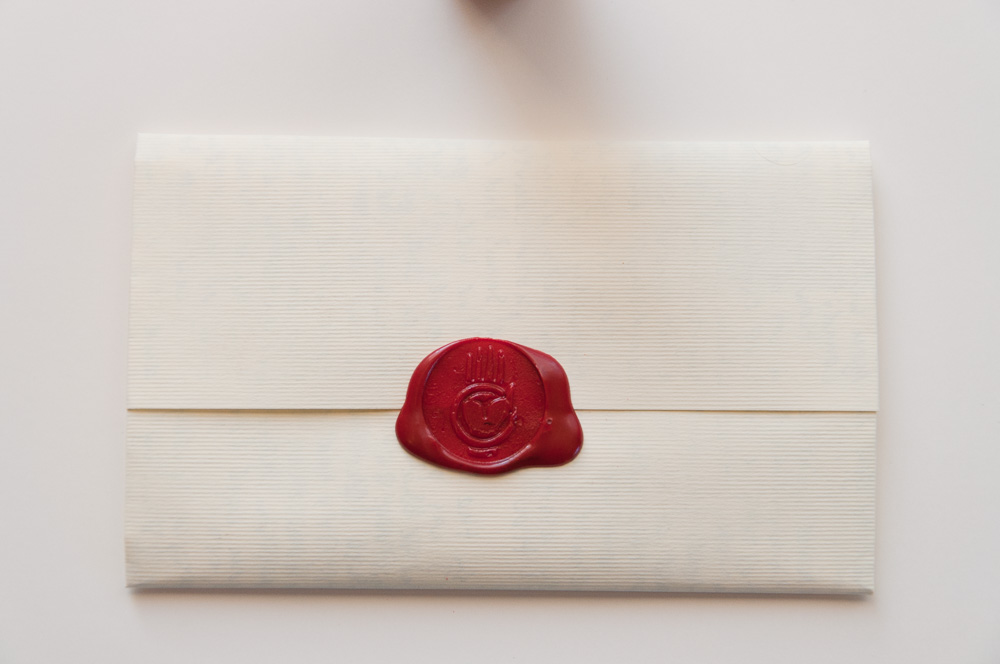 This is sample letter I sealed with Hand of the King wax seal. Size of the seal will depend on the diameter of your wax seal stamp.

Bad things happen sometimes, no matter how hard you try. So you may one day find yourself in the situation when something went wrong and the situation needs to be dealt with. Here are some advices on the most common problems with using a wax seal.

Wax seal sticked to my stamp and now it’s plugged

It happens sometimes when you lift the stamp too late or you forget to wipe the matrix with oil first. Solidified wax is extremely difficult to remove from the grooves on the matrix and you need to be careful not to destroy the pattern on your matrix while removing the wax. The easiest way to remove the wax that plugged your stamp is to place it in a cup of very hot (almost boiling) water for a few minutes (it only applies to stamps made of metal or ceramic, do NOT put those with a wooden handle into the boiling water!). That should soften the wax and make it easier to remove. Then you need to use a soft but pointy item to carefully hollow the wax out of the grooves on a matrix. The best thing you can use is a toothpick. It’s wooden, so it won’t scratch the surface of a matrix, and it’s pointy enough to remove the softened wax from the grooves. Do not use knives, paper clippers, scissors or any metal objects! The material the stamp matrix is made of is usually an alloy of brass and some other metal, which means that it’s softer than you think! After all it’s made to press down soft, melted wax, so it doesn’t need to be resistant to scratches and damage from other, harder objects. If you use something harder than the alloy the matrix is made of to clean the wax from it you’ll most likely scratch it, and every scratch or groove you’ll make will be visible in next wax seals you’ll be making with the stamp.

Wax seal has ugly dark flaws, spots or trails in it

As mentioned above, it’s utterly important to keep the sealing wax stick as lower in the flame itself (and NOT above the flame!) as possible, to prevent the soot from polluting melted wax dropping on your letter or envelope. Sometimes if you raise the stick too high a bit of sooth will melt down with the wax itself and spoil the pure colour of the wax you use. Unfortunately, there is no way of purifying the seal when it happens. You just need to wait for the wax seal to cool down, then carefully remove it and put a new one. The darker the sealing wax the more resistant for pollution it is (in a way you wouldn’t notice the black marks and trails in darker wax that much). I use commonly red and dark green sealing wax and the latter is far better when it comes to avoiding black marks and dots. Be extremely careful with white, silver or golden sealing wax as even a single drop of sooth can spoil the entire wax seal in these colours.

That’s it. I hope you’ve enjoyed this guide on using a wax seal and found informations helpful. In the next guide I’ll write about different ways of folding letters. Stay tuned!